February 24, 2009
Our trip to Beirut was very comfortable (Middle East Airlines), on the way we watched a movie called "The Women" starring Meg Ryan and Annette Bening, it is a typical movie, a women who finds out that her husband is having an affair, but what I liked is the idea of doing a whole film without having a single man appear in a scene, that was clever, you don't get to see the husband and you don't get to hear his voice, either he calls or you hear people talk about him. You won't even find a man at the back of a scene passing by, none.
After we landed we head to the hotel, changed our clothes ate in the hotel restaurant then went to Solidaire, We were exhausted, we just got to Aishti and to couple of boutiques and that's it. 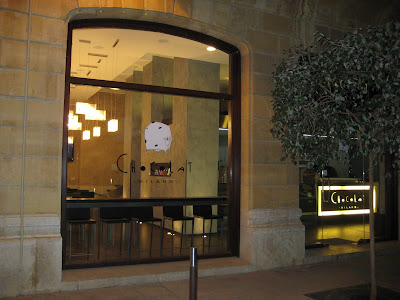 While we were walking we found this shop called "Chocolate Milano", sadly it was closed.enshallah tomorrow we will come and check it out, we saw a chocolate shoot machine, that, I wanna try ... yummmmmy.